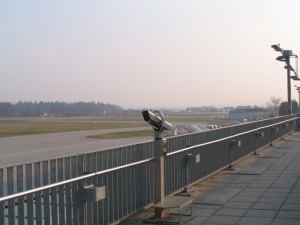 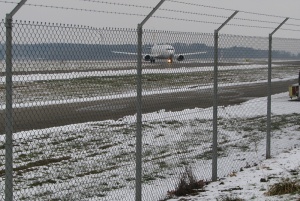 Spottingpoint at the kart circuit 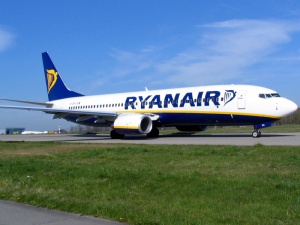 The daily guest in Friedrichshafen. 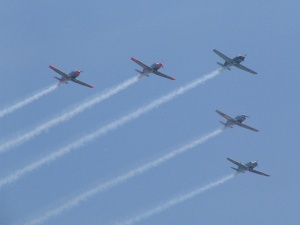 There is a visitors terrace situated on the third floor of the terminal which offers views of taxiing aircraft, the apron, and the runway 06/24. Spotting from the terrace a focal equivalent of about 300mm is needed for capturing airplanes such as the DHC-8-300 Dash 8 on the runway.

According to the airport terminal plan, there is a restaurant on the second floor and a snack bar on the terrace.

A few walking minutes away from the terminal is the tower. The fence at this place has mesh that is semi-large. From here you can take pictures of the aircraft on the runway or on the taxiway.

You can find another spotting location if you comming from the airport follow the "Bundesstrasse B 30" toward city. You will see at the right sight a kart circuit and the fence of the airport.

The airlines listed were taken directly from www.fly-away.de on May 26, 2008.

On the other side of the airport is the Zeppelin hangar. Here, the blimp takes off for sightseeing fligts.

The Airport has its own Railway Station and is situated approx 100 metres (1 minute walk) from the Terminal Building.

The AERO is an exhibition for General Aviation in Friedrichshafen. The fair takes place every year and the next is from April 8th until April 11th 2010. A spectator can see a lot of interesting aircraft and spectacular air shows.

Retrieved from "https://www.spotterswiki.com/index.php?title=Friedrichshafen_Airport&oldid=10864"
Category:
Cookies help us deliver our services. By using our services, you agree to our use of cookies.