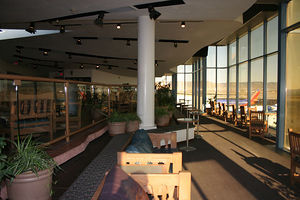 There is a very nice observation lounge in the terminal, located above the food court. Stairs are located on either side of the food court. However, it is past the security checkpoint so it is accessible only if you are traveling. There are several comfortable chairs, couches, and tables, and there are very nice floor to ceiling windows that provide a view of the ramp and runways.

A gravel lot near the threshold of runway 03. This runway is used less than 08/26 so movements here can be slow. However, when winds cause traffic to reverse, many departures will use runway 21 to avoid the longer taxi to runway 26, though heavier aircraft will still use the longer runway 26. Because of the distance from the runway and the fence, photographing arrivals is difficult and few departures use this runway. The cargo facilities are close and offer a few opportunities for photos. All movements on this runway can be logged however. Arrivals on runway 08 are in view from this parking lot but are too far away for good photos. As of January 2022, the official spotting lot has been closed off to the public. However, there is a similar dirt lot adjacent to the original one which provides largely the same viewing opportunities.

A small pull-off at the South end of this cul-de-sac. Most movements on 08/26 (the main runway) can be logged. This won't be a good place to spot arrivals on 08, but you may be able to get pictures of departures on that runway from quite a distance. If you do not want to go through security to get to the Spotting Lounge, this is probably the best place for 08 departures. Some arrivals on 03 may be missed. The parking lot is best for spotting aircraft taxiing in and out of Concourse A (mostly Southwest and United Express) and Concourse C (small commercial airlines like Boutique Air and Advanced Air). Keep in mind that although this was a great place to spot arrivals/departures on runway 17 previously, the runway is closed now.

The FBO parking lot is not a great place to spot runway action, but it provides opportunities to see taxiing and parked general aviation aircraft. It is okay to spot here for the most part, but be advised that you may be asked to leave if you stay for long periods of time.

As you drive down University towards the Spirit Drive location mentioned above, directly across from Access Rd B, there is a rather large dirt lot right on the threshold of runway 08. It is impossible to see departures on runway 08 from here, but arrivals onto runway 08 come in directly over your head at about 300 feet. This isn't an official spotting location, but it is one of the better places to see arrivals onto RWY 08.

If you continue south down University past Spirit Drive, you will see a large rattlesnake in the median. Just past this on your right is a hill with trails lining it. This may seem appealing because it falls directly underneath the approach path for 03 arrivals and is quite close to the runway threshold. This hill and the trails that line it are part of a public MTB and ATV park. Not recommended because there is no place to pull off, no parking lot, and you'll probably get better views from the Albuquerque Airport Viewing Area. If you want to take pictures from here, you should park at the viewing area and walk here (about a 25-30 minute walk), but keep in mind it is not an official spotting area, and you may get asked to leave.

On your way to Spirit Drive (above), you will see a Boeing 727-200(Adv)(F) and smaller GA aircraft parked by the FAA hangar. There is an employee parking lot which gives excellent views of the 08 approach. Resist the temptation to use it, you will quickly be told to leave or possibly worse.

Time was you could park on the access road with impunity. Since 2001, this is now a totally secure area.

Southwest Airlines is a dominant carrier at the airport. Traffic on the weekends is noticeably less than during the week.

Airlines such as Allegiant and Frontier do not fly to the Sunport every day of the week, and some airlines only do one flight daily into the Sunport, such as JetBlue.

The Sunport sees regular cargo services from FedEx and UPS. UPS typically utilizes the Airbus A300-600R (F), Boeing 767-300ERF, and Boeing 757-200PF. FedEx from time to time sends its A300-600R (F) to Albuquerque, though the Boeing 757/767 are more common. They also operate Cessna 208B Super Cargomaster aircraft throughout New Mexico, with the flights originating in Albuquerque. These flights are operated by Empire Airlines. As a rare treat, the DC-10 has been known to make an appearance, from usually 10 Tanker Air Carrier, FedEx, or UPS. As of January 2022, Amazon's Prime Air has expanded operations out of the Sunport, with service from their ATR 72 freighters, operated by Silver Airways. Amazon's airline has plans to expand more out of Albuquerque in the future.

Firefighting airline 10 Tanker Air Carrier stores their fleet of four aircraft on the cargo ramp, near the dedicated Spotting Area on University

Even with Double Eagle as the city's general aviation reliever airport, the Sunport sees its fair share of general aviation traffic. Aircraft ranging from Skyhawks to Boeing Business Jets have been known to stop by for a visit. The Sunport is also home to Eclipse Aviation, makers of the Eclipse 500 very light jet.

With Kirtland Air Force Base occupying much of the western portion of the airfield, you are guaranteed to spot some type of military aircraft. The most dominant of these being helicopters. Spotting these may be difficult, as they depart from the base itself and fly south to the "Aux Field" and controlled firing areas. The base also plays host to the New Mexico Air National Guard equipped with F-16Cs. The 58th Special Operations Wing operates from Kirtland as well, affording the opportunity to see aircraft including Lockheed C-130s, Boeing MV-22 Ospreys, and Boeing C-17 Globemasters on a regular basis. Other aircraft seen can include the Boeing E-6 Mercury, and Boeing KC-135R.

The US Department of Energy maintains a ramp on the Kirtland portion of the field. Although flights are infrequent, they do afford an opportunity to spot "baby" DC-9s and deHavilland Twin Otters.

In addition to base traffic, transient military traffic is a regular occurrence at the Sunport. Anything is possible, from T-6A Texan IIs to F/A-18 Hornets.

National Nuclear Safety Administration Boeing 737-400(C) aircraft are also a common sight at the Sunport, and they also have a DC-9-30 on the ramp near the GA area

Retrieved from "https://www.spotterswiki.com/index.php?title=Albuquerque_International_Sunport&oldid=17173"
Category:
Cookies help us deliver our services. By using our services, you agree to our use of cookies.