1. The public viewing area on the 3rd floor of the terminal. There are general views of gates 9, and surrounding apron (gates 6/7). Access is from an elevator behind the Tim Hortons. Glass fronted, facing North. A few seats. Note: If you're past security, you can get the same view as the public viewing area by going to the Gate 9/10 boarding area and using the window there. 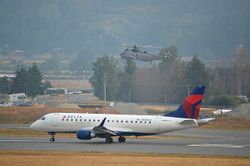 A small hill north of the airport with views of runway 09/27. Great to get pictures of traffic landing on 09 or taking off on 27, has overlooking views of the airport. Follow Mills road along The Flight Path Trail, and park at the bottom of the hill by the Holy Trinity Church. At the top of the hill, there is a "Lost Airmen of the Empire" memorial with benches and water. The fence gets in the way a little, but overall great photography.

A park in Sidney near the Anacortes ferry, across the road from the Cedarwood Inn & Suites. No runways are viewable here, but traffic landing on 27 or taking off on 09 are viewable. You'll mostly get underside shots of the aircraft, but with decent positioning side shots are possible. Benches, bathrooms, and water.

If the Cyclones are active, you may be approached by a military guard. Depending on his mood you may be asked to leave.

For foot/bike transportation, use the Flight Path Trail - it's a trail surrounding the airport, offering access to all of the spotting locations, including the passenger terminal. In front of the short term parking area of the passenger terminal, there is a bike maintenance area with pumps, tools, and storage.

For bus transportation, there are routes 70/71/72 which stop at McTavish Exchange, where you can transfer to the 88 Airport or 87 Airport/Dean Park.

Retrieved from "https://www.spotterswiki.com/index.php?title=Victoria_International_Airport&oldid=16657"
Category:
Cookies help us deliver our services. By using our services, you agree to our use of cookies.