Difference between revisions of "Split Airport"

Split Airport (IATA: SPU, ICAO: LDSP; Croatian: Zračna luka Split), also known as Resnik Airport (Zračna luka Resnik), is the international airport serving the city of Split, Croatia. It is located 24 km (15 mi) from Split, on the west side of Kaštela Bay, in the town of Kaštela, and extending into the adjacent town of Trogir.

Split's first commercial route was opened in 1931 by the Yugoslav airline Aeroput which linked Zagreb with Belgrade through Rijeka, Split and Sarajevo, and maintained this route until the start of the Second World War.

The current airport was opened on 25 November 1966. The apron had dimensions of only 200 x 112 m and 6 parking positions with a planned capacity of 150,000 passengers. In 1968 passenger numbers stood already at 150,737, and in 1969 at 235,000. In 1967, the apron was extended for the first time to accommodate 10 aircraft. A new larger terminal building was built and opened in 1979 to accommodate traffic for a major sporting event (the 8th Mediterranean Games) held in Split in September, when also another extension to the apron was built. The largest pre-war passenger numbers were achieved in 1987, totalling 1,151,580 passengers and 7,873 landings. In 1991 the passenger figures dropped almost to zero, as the war in the former Yugoslavia broke out. In the years that followed, most of the traffic were NATO and UN cargo planes, such as the C-5 Galaxy, MD-11, Boeing 747 and C-130 Hercules. After 1995 the civilian traffic figures began rising again, and finally in 2007 surpassed the 1987 record.

In 2005 the terminal got a major facelift adding one more gate, the glass façade, as well as the steel/fabric palms illuminated by multi-colour LEDs. The busiest time in the airport is during the summer season, as the city of Split is a major tourist destination and a very important transportation hub. Saturdays are the busiest days of the week with more than 200 aircraft operations and 25,000 passengers.

At 1. floor behind the restaurant is a crowded and small viewpont behind tinted glas. 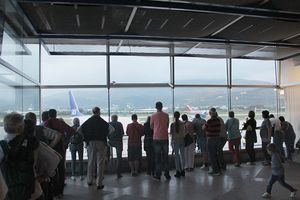 Retrieved from "https://www.spotterswiki.com/index.php?title=Split_Airport&oldid=15483"
Category:
Cookies help us deliver our services. By using our services, you agree to our use of cookies.