The "Viewpoint Park" overlook on the West side was closed in 2001, and has now disappeared under the 3rd runway.

To the North of the airport there is a small park at 24th. Ave S. and S146th St. Arriving traffic on the 16L and 16C can be logged and photographed from here. There is room for about five cars to park. The Port of Seattle police occasionally patrol here although technically it's not airport property. A quick ID check and they'll leave you alone. This spot is best in the morning hours and a 300mm telephoto lens is recommended. 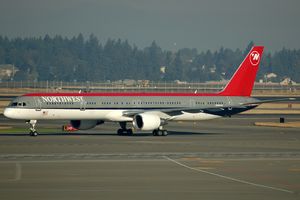 To the immediate S. of the airport is the Tyee Valley Golf Course. Assuming you're not playing a round, there are a couple of spots nearby. The car park offers views of arrivals on both runways although the trees can get in the way.

A road goes around the W. side of the course allowing for spotting runway 34R traffic (that on 34L flies directly overhead), but the subjects for photos will be a bit high and it's only good in the afternoon on sunny days. The road bends halfway down so has 2 names - 18th Ave. S. and/or S196th St.

Pretty much anywhere along here, from the fire station to the FedEx facility is off-limits. The Port police will respond very quickly to anyone "loitering" around here and move offenders on.

You can catch a King County Metro or Sound Transit bus on the south end of the baggage claim area, just outside door 2.

Taxis and Hotel Shuttles are located on the third floor of the parking garage. From the baggage claim, go up to the parking level, go across a sky bridge, and down to floor three.

To catch the Downtown Airporter - a shuttle that takes you to the Sheraton, Westin, Hyatt, Warwick, Downtown Hilton, Crown Plaza, Madison or Fremont hotels in downtown Seattle - from the baggage claim, go south (carousel numbers going down) all the way down to door 00 located inside the atrium or north of carousel number one.

If you arrive early and your airline will not let you check your luggage until a certain number of hours before your flight, you can drop it off at Ken's Baggage. It's located on the baggage claim level in between carousel number twelve and thirteen.

There are two booths at the airport to convert foreign money into United States Dollars. One is located by the Northwest Ticketing counter on the ticketing level, and one in the baggage claim across from Carousel number two.