From SpottersWiki
(Redirected from OKC)
Jump to navigation Jump to search

This spot is located on Air Cargo Rd. on the east side of the airport. Take Air Cargo Rd. south until you see the post office on the left hand side, it is just north of the Employee Parking Lot. Pull into the Post Office and walk east down the south side of the building. There is a fence at the end which will provide good views of Taxiway E, Taxiway N, and Runway 17L/35R. This spot is best in the afternoon and late evening. A 70-300 is recommended, although a 70-200 will work absolutely fine. You will have to shoot through a fence at this location.

Drive towards the Terminal and park in the short term parking garage (1st hr free). Then walk to the long term garage (just north of the short term garage). On either side there are stairwells which provide a good place to stand without blocking parking spaces. For the east side you can see traffic on the east terminal ramp, Taxiway E, Taxiway N, and Runway 17L/35R Ops. A 100-400 will work fine for the east side. For the west, you can see West Concourse North Ops (basically CO, UA) using the gates and the taxiway just north of the concourse. Runway 17R/35L ops are pretty much useless for the limited visibility and long distance to the runway. For terminal ramp and gate ops, a 70-200 is fine. If you want to attempt 17R/35L ops, bring the big nasty out. 300-500 if heat haze doesn't kill you. East side is afternoon/evening, west side is morning with limited afternoon if the light is right.

Park in the short term, then take the elevator down to the basement, then catch the moving walkways into the terminal, then take the escalators to the top level and exit the Terminal, on the west side of the terminal a walkway goes down the departure roadway, near the west concourse. Follow this down until you can see over the wall comfortably, the wall starts about 25 feet high, then tapers off to about 3-4 feet. Good head on shots can be taken with planes using the UA/CO gates. Other than that, you won't get much other action from this spot. Police are on duty less than 200 feet away, bring all identification and leave at once if they ask you to. Don't argue your rights, just find somewhere else to shoot. They normally won't bother you. A 70-200 will work. Morning spot and some (very limited) afternoon/evening.

There are 3 main roads that surround the OKC Airport, all provide some sort of viewing of the airport, all of which require a shoot and run technique. First, the road just north of the airport,54th Street, mainly arrivals and departures is all you will see. You have to find a place to exit the road (there is a curb, but some parts are flattened "driveways"). Make it quick -- get out quickly, take your pictures, and leave. Next is Portland Ave., it runs parallel to runway 17L/35R and does not have curbs, you can pull off wherever you want to, but there are "no parking" signs. Get out, get to the fence, take your pics, and leave. For 104th Street which runs on the south side of the field is good for departures and arrivals, which will be overhead, just as 54th Street. For 104th street, there is not really a good way to get anything arriving on Runway 35R in the morning. For the afternoon, there are a few driveways to farms you can pull into and sit for a few minutes. It takes a little bit of practice and planning to figure out which driveway is best. For runway 35L in the afternoon, the best driveway I have found is the 2nd driveway on the right if you were coming from MacArthur Blvd. 150-300mm would be required for that, although I have had moderate success with my 70-200 with a little bit of cropping.
For runway 35R on 104th street, there is really only one driveway nearby and it requires 300-400mm or so. The best advice is to drive around a little bit and test out which driveway/angle works best for you.

Note: This Google Satellite Photo is from 2001-2002. The buildings and roads may not be 100% accurate, the spots shown are where they are current time. 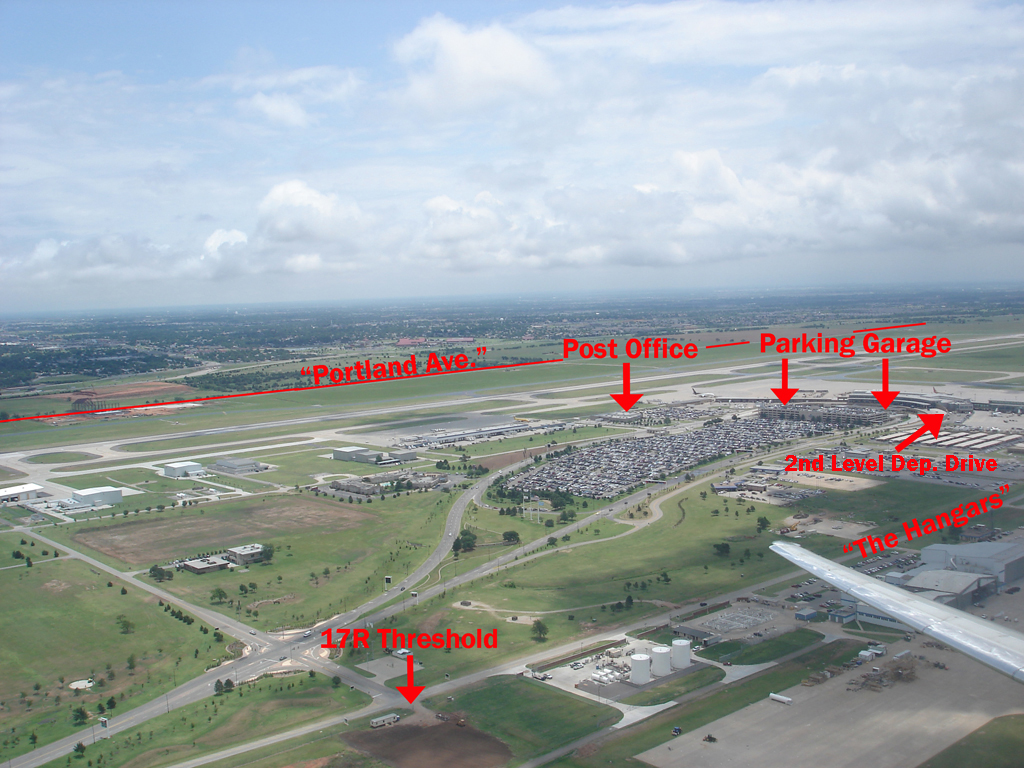 Do some homework before you go.

1. Check the weather, and find out which runways are the actives. Generally if the wind is from the North, Arrivals will be on 35R and departures will be scattered between 35L/35R. If winds are from the south, any arrivals from the North, South, or East will land on 17L, and departures again will be scattered between 17L/17R. Most planes inbound from the west will take 17L. That's not always the case, so be flexible.

2. Go to Flightaware.com and print or write down the next 10-15 arrivals and departures by flight number, destination/or departure point, and ETA or the scheduled departure time. Now when spotting you have a general idea of where you need to be at each designated time. It is very easy to find yourself on the wrong side of the airport when something happens on the other side. If you are catching arrivals, listen to the approach frequency to get a heads up on where you need to be. If you are catching departures, listen to Ground to here what runway the planes are going to taxi to.

3. Have fun. If you encounter police officers or anyone else questioning what you are doing, please, don't give them a hard time. Be polite, courteous, and willing to show ID if asked to. I have not heard or had an encounter with anyone except for when I was spotting in the middle of the dark, which was suspicous.

Retrieved from "https://www.spotterswiki.com/index.php?title=Will_Rogers_World_Airport&oldid=15717"
Category:
Cookies help us deliver our services. By using our services, you agree to our use of cookies.