Malpensa Airport is Milan's main airport. Located 40km NW of the city is the busiest airport of Northern Italy. The airport is hub for many airlines of every kind such as Lufthansa Italia, easyJet and Air One (low cost), Air Italy, Blue Panorama, Livingston Energy Flight and Neos (charter airlines). 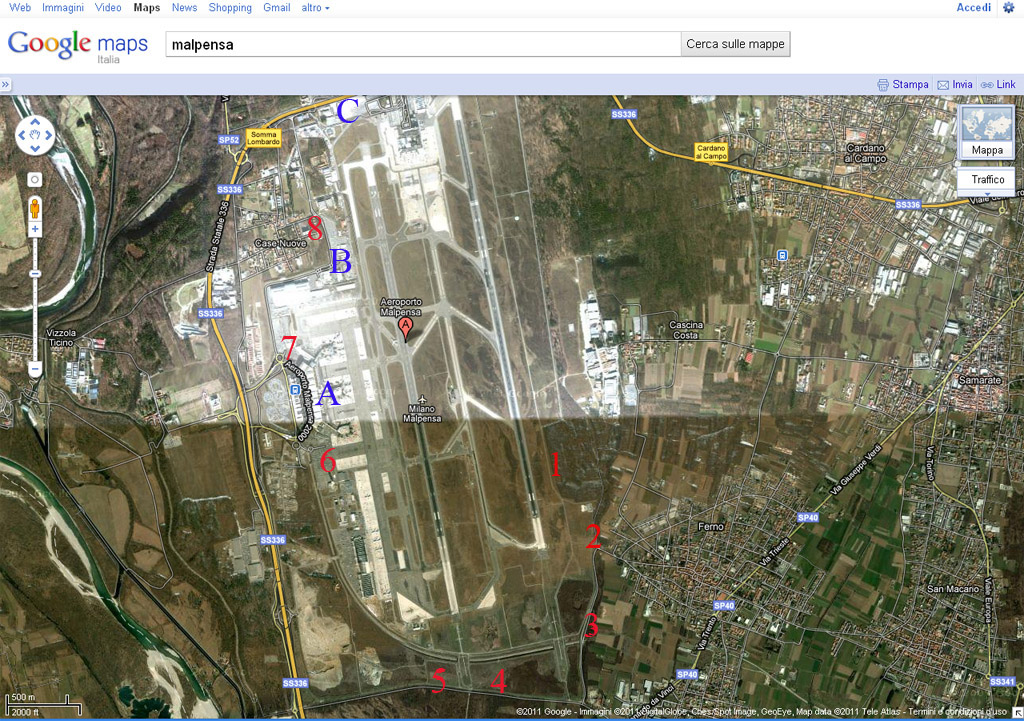 How to go to morning spotting points:

SPOTTING POINT N° 2: A car is recommended because from terminal 1 to spotting point n°2 there are about 8km. Starting from the terminal, follow the signs leading to the control tower. After it passed, go straight until the roundabout where at the left there is the cargo terminal. At the roundabout take the first exit and follow the road until the next roundabout. Take the second exit and after few meters there is a stop. Turn left and proceed straight. At the roundabout take the third exit and you will be on "Via Molinelli", which is located behind the southern runway heads. Proceed until you find a road on the left, turn left and proceed straight. About 800 meters after the overpass, when the road turns right, there is a small parking in front of you. Be careful crossing the street, you can park your car here and you are arrived at spotting point n° 2. You can take pictures from the little hill behind the parking or from the playground games closer to the parking. From this spotting point you can take all traffic landing or departing from runway 35R, depending from noise abatement procedures, if 35R is used for departures or landings.

If 35R is used for departures, you can take pictures of planes lining up with the background of the cargo terminal and often with other aircraft landing on the runway. 35R departure with 35L landing

With around a 400mm lens you can take close-up shot of lining-up planes. 35R lining-up close-up

You can also photograph the landing on runway 35L, which is located about 1 km away, but it’s often disturbed by the heat distortion. 35L landing taken from spotting point n°2

35R landing taken from the hill

The light is good from early morning until 11.30, this location can also be used for good sunset shots. The focal length required is at least 150mm.

SPOTTING POINT N° 1: Walking towards the firework station, take the first left and continue along the perimeter net. you get along the east perimeter of the runway 35R which is much closer, and you can take pictures at the touch down. The only problem is the net, which is high but there are some holes in it where you can enter the lens and shoot.

35R landing with a ¾ angle from spotting point n°1

SPOTTING POINT N° 3: The spotting point n° 3 is the overpass that was passed first to arrive at the spotting point n° 2. You should not make U-turns on it, but go until the end of the road, turn right and at the first available open space, drive back to the spotting point. From this position you can only shoot aircraft landing onrunway 35R, with only the sky background.

The light is good from 9.00 until 11.30, this location can also be used for good sunset shots. The focal length required is less than 50mm for the shot of the entire aircraft, while the close-up from 200mm up.

SPOTTING POINT N°4: Spotting point n°4 is used both in the morning and afternoon if the runway used for takeoffs until 15.00, is the 35R. You are on the new taxiway, the taxiway H. Spotting point is located on Via Molinelli, the southern end of runway 35L. Along Via Molinelli there is a small hill, you park next to it and you can take the airplanes that cross the taxiway H for going to line up on runway 35R. This taxiway is not always used, often miss important traffic, but it is a good alternative to classic spotting points. You can also photograph the landing on runway 35L, which occur just above your head.

If after 15.00 landings are on runway 35R, you can walk until the red and white radar, and take shot at landing planes.

SPOTTING POINT N°5: Spotting point n°5 is very similar to spotting point n°4. From spotting point n°4, continue in direction of n° 5,you will have a little parking on the right. You can take the airplanes that cross the taxiway H, but on take it you must have a 2mt+ ladder, or go to the Second World War house builted on the opposite side of the street. It’s not recommended because if the police see you inside makes you get out and away from the spotting point.

SPOTTING POINT N°6 This spotting point is located at the south of the terminal, inside the parking employees. The car can be parked in the free space near the control tower. You reach the parking employees walking in terminal direction and you can shoot through the net. This spotting point is recommended in winter because in summer there is an high heat distortion. From this position you can take pictures of planes that are about to park at the finger or remote stands, aircraft that taxi in the nearest taxiway and the opportunity to photograph close-up at the nearest planes. There is the opportunity to take night shots at parked planes in night-stop.

The light is good from 15.00 until night. The focal length required is less than 50mm for the shot of the entire aircraft parked closer to you, up to 300mm for taxing plane.

SPOTTING POINT N°7: This spotting point it is easy to reach, as it is located adjacent to Terminal 1. To get there by car follow the signs to Terminal 1 departures. Once the terminal gates are finished, continue until at the right is a parking, which makes you the visibility of the maintenance hangar. The parking is not free, but there is the possibility to stay close to the car and move only to photograph when you see the plane. If you haven’t a car, from terminal 1, departures floor, exit at any gate and turn right, you will find this parking after around 300mt from the terminal. The traffic you spotting from this point is very low, it is only useful to photograph the FedEx aircraft , which moves from its own terminal for takeoff. Often there are several parked aircraft at remote stands, which can be photographed but only with a shot from a little behind. Sometimes there is the possibility of taking photos at planes that from apron are moved into the maintenance hangar. With a long focal length, you can shoot departing planes from 35L but you will see it at the last moment. You can take pictures of taxing plane which exit from runway and go to parking, but you should be lucky that there wouldn’t be parked planes as obstacles. There is the opportunity to take night shots at parked planes in night-stop.

Aircraft on taxi to terminal

The light is good from 13.00 until night. The focal length required is at least 70mm for the taxing in front of, up to 300mm for other photos.

SPOTTING POINT N°8: Spotting point n°8 is a location where you can only make shots the planes taking off from runway 35L. To join this location, from terminal 1 follow the indication for terminal 2. After the mainteinance hangar, at the roundabout turn left and continue to terminal 2. At the first street that you find, you turn left and you are at Holiday Inn hotel. You can stay there with your car or, if you want you can go straight and park the car on the right in a small parking and come back until the stop signal. At this, walk to right and after you will see a hill. Climb it, a little difficult, and you will have free visual. The planes are already flying at various heights as it depends on their point of departure. Often heavy aircraft offer breathtaking and very low take-offs, unlike the various A319-A320. But some artistic shot can be taken.

The light is good from 14.00 until sunset. The focal length required is at least 110mm.