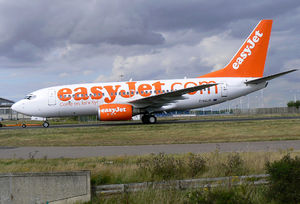 Taxing over the bridge:

Just beyond "The Bridge" (see above), there is a large airport car park. From here you can see the runway and the hold point for aircraft awaiting 08 departures. There is a large mound of gravel near the fence here which many photographers use to get above the level of the fence. This spot is facing south, so is best in the summer evenings for photography. I have never been moved on from here despite spending countless hours at the spot, however if you are asked to move, please do. Holding before 08:

Below is a list of the scheduled passenger airlines operating into Luton:

Luton airport parkway serves the airport, although it is not directly adjacent to it, a shuttle bus runs about once every 10 minutes during peak times. Formerly free, rail passengers now have to pay £1 each way for the shuttle, and non-rail passengers have to pay £1.50 one-way and £3.00 for return. The railway goes all the way from Brighton in the south, through London and up to Bedford, but there are faster services available which go much further north as well. There are numerous buses running from all over the south east. All of the spots above except the crash gate are within easy walk of the terminal.