Khabarovsk Novy International Airport is one of the largest airports in Russian Far East. There is no airline based since Dalavia went bankrupt in 2008. Airport has two parallel runways: 05L/23R (3500 m) and 05R/23L (4000 m, equipped with cat. II ILS). Main runway is 05R/23L, it is used for arrivals and departures. 05L/23R is used mainly as a taxiway, but some aircrafts (primarily small, like An-24) sometimes lands and departs from this runway. RWY 23 used most of the time, but sometimes (mostly in autumn and spring) runways 05 are in operation.

There is also Local Airlines airport (UHHT) about 1 km from Novy but due to extremely low traffic (only couple flights a day) it is not very interesting for spotting. But some locations from there will be mentioned as well.

Unfortunately, there are no official spotting locations in the airport.

However, if you go to Local Airlines airport, there are Mi-1 and An-2 standing as a memorials. You can take pictures of these aircraft in any way you like. There is a night illumination on the memorials. 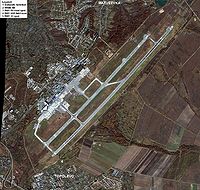 If you go to the domestic terminal, there is a good view of the apron from the 2nd floor. However, there are few problems here. First of all, glass in windows is old and dirty. Then there are "Photography prohibited" signs everywhere. Remember: There are no laws in Russia that prohibit taking pictures of aircrafts or in airports. However, airport security and police quite like to argue about that. So if you don't want to be arrested, don't stay there for a long time. Or at least don't hold the camera permanently.

This location is good if you want to take photos of planes standing on the apron and don't care very much about quality (or you are master of Photoshop). Windows are facing east so best lighting there is in the afternoon.

VIP lounge is located in the right wing of the domestic terminal, so you can get there very easily. View from this spot is partially the same you can get in the terminal, but there is no glass (obviously). There is a fence in front of the hill, but you will need to raise the camera only slightly to compensate for that. Aircrafts taxiing via TWY A will be right in front of you. But since this TWY used almost only when RWY 05 in operation, do not expect very much traffic there. You also can take a shot of Dalavia Tu-154s standing in the pocket of TWY A from this location.

Security also might be a problem. You will be clearly visible from the apron and therefore you almost certainly will attract airport security. Summarizing, this spot is good for taking pictures of aircrafts on the apron, not recommended for a long stay. Lighting conditions are the same as in the terminal.

Road from the side of RWY 05

Main place to spot when RWY 05 in operation. It is a car interchange, so place won't be a problem since you stand on the side of the road. This spot is suitable to take pictures all day, but recommended afternoon shots are recommended. To take photos in the morning you need to walk a little bit further (basically, pass a railway crossing), but it will be a slightly less comfortable because cars will pass near you at high speeds and there is no border between pedestrian walkway and road.

Security isn't a problem there, nobody cares what you are doing since you don't get in the cars way.

Road from the side of RWY 23

Main spotting place due to amount of time RWY 23 is in operation. You will need to stay where the main asphalt road intersects with secondary soil road that goes parallel to the runway. Aircrafts landing on RWY 23 will be at extremely low altitude, you can shoot them even with 50mm lens. You can stay on the soil road (where virtually no traffic at all) or move a little bit further from glidepath and stay on the back side of the road (again, cars will bass you by at high speeds) or even in the field nearby (not always possible due to mud and water).

Place is good before midday, but afternoon photography also possible. But there is a police post right under the glidepath. If you stay from the left side (and this is what you do before midday) of the glidepath, they don't see you thanks to the trees. If you move so to be comfortable with afternoon light they will be able to see you and might argue about photographing.

There are some bended steel-concrete poles near the beginning of RWY 05R which are located close to the fence of airfield. Some of this poles are straight vertical, some are bended so you can stand on them. From there you can see aircrafts landing, taxiing and lining up on 05R. The clearly visible section of runway is from TWY E to TWY F, the rest of runway is obscured by ATC service building to the right. This is a very good spot thanks to short distance to aircrafts but getting there is harder than to any other place. Main problem is to cross the field from the road that goes parallel to the runway from Topolevo. It can be muddy, especially in the autumn and spring, so you probably will need a high boots. Then there is a high grass (mainly artemisia, be careful if you are allergic!) all over the field. Security is not a problem here. There is no police posts around, but airport security can patrol the perimeter using the inner aerodrome road, you need to avoid being seeing by them. Also runway inspection car shows up regularly but looks like they don't care about spotters.

Conditions here are pretty much the same as for UHHH spot mentioned earlier only staying here is easier because there is a bus stop almost in front of RWY 05 beginning. The only traffic you can catch is morning departures of An-28/38 and Mi-8 and evening arrivals of the same aircrafts. Flights on the rest of the day are very rare.

If you want to explore the area around - feel free do it. You can find many places around the airport perimeter with some hills, nicely growing trees, poles like in RWY05R spot. Main problem of them all is that these spots often not compensate for the efforts and trouble you might have.

Also it is not recommended to use stairs in any place near the airfield fence. Getting (and trying to get) to airfield is a crime, security might think that you are trying to get over the fence with stairs. You can be arrested even before you will have time to explain yourself. Again, remember: police and airport security are not friendly to spotters and you have to take precautions not to be caught by them.

There is a wire fence near the main car entrance which gives a good view of TWY C. But don't try to spot there: in the security post of the entrance there are police officers on duty. You will be in big trouble if they see you taking photos.

There are no regular cargo fights but Kalitta Air often stops for refueling on its B747-200 flighs from Asia to Anchorage.

You can get to the airport using bus routes 18, 35 (goes to the airport from bus and train stations), 60, 80; trolley routes 1, 4. Airport is the end stop of all this routes except 80, which goes to Matveevka. To get quickly to RWY 05 side you can get off on the "Pilot" stop and continue to spotting places by foot. You also can use bus route 55, which goes to nearby village Topolevo, but some walk will be necessary as well. Getting to RWY 23 side is tricky if you don't have a car. The nearest you can get on public transport is get in bus 80 and then get out at stop "Tsentralnaya". Then you will need to walk about 2 km.

There are not many shops in airport area. Main advice is do not buy anything in terminal building, prices are higher by 15-20%. For snacks and drinks you can go to nearby gas station or to the kiosk at the bus stop. There are also some shops in Topolevo and Matveevka.

Retrieved from "https://www.spotterswiki.com/index.php?title=Khabarovsk_Novy_Airport&oldid=14938"
Category:
Cookies help us deliver our services. By using our services, you agree to our use of cookies.