Geneva Airport is situated 4km outside of Geneva. Also called Cointrin because of the name of the village its on, this airport is quite good for business jets as there are a lot of VIPs coming to GVA on a regular basis, and it is a base for Jet Aviation, Tag Aviation and Privatair.

Winter time is the most interesting time in GVA as there are a lot of charter planes coming in from all over Europe for skiing. The traffic gets quite dense on Saturdays and Sundays.

The only place to spot that is "official" was the "viewing terrace". This area has been closed and is being converted into a restaurant. The restaurant offres great views on the Tarmac and on the runway, but bear in mind that this is a top-notch restaurant and the prices are to be expected accordingly.

If you want to take photos of planes, there are a couple of places to spot in GVA. First of all, check if the runway in use it 23 (over the lake) or 05 (over the Jura mountains, from France. You are never bothered by the police as long as you don't sneak through the fences!

For runway 05 in use

Spot 2 Is better for approach pictures, though only in the afternoon (summer) and late afternoon (spring + fall). Walk across the runway threshold and to the west. Get near the petol station, but don't cross the road. From there, there are some electrical "boxes" on the side of the pedestian path where you can climb on to get some pictures. The pictures you will take are like this one.

For runway 23 in use

This runway is more appreciable, as there are better spots to take good pictures. 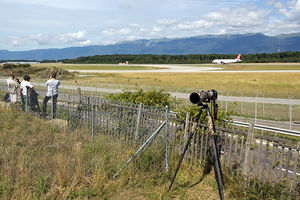 Location for the Runway 23

Spot 3 is good in the morning till early afternoon. From the terminal, drive north taking the direction of the highway to Lausanne. Don't enter the highway, keep on driving along the airport cargo terminal and follow "Ferney". Just when you see you're about to enter a tunnel going under the runway, take a left (direction "Cargo"), and then 200m further, you'll see a hill.. Climb on it (but stay on the road side, outside any private property). From there, you can have all the approaches. The approach pictures you will take are like this one.

Spot 4 Certainly the best spot in GVA. Good from early afternoon to the evening. In winter, the sun gets behind you quite late. The alternative is spot 4 as long as the sun is not good enough. It is a parc, situated on the French territory. Please note that you have to pass the border there so be sure to have your ID/Passport. Just like for Spot 4, drive all the way in the direction of "Ferney", but this time, take the tunnel. The other side is France. You will then pass the border (no problem, takes no time). Take immediately to the right at the roundabout (Direction "Auberge Schweitzer"). Drive about 300m and then, you will see a Lidl supermarket to the right. Park your car there and then, you can just walk up into the park. You will have excellent line-up and approach shots, as you are on a little hill and the fence is no problem there. The approach pictures you will take are like this one, and the line-up shots are like this one. If you are lucky enough like in the line-up picture shown, you will be able to have the mountains visible in the background, such as the famous "Mont-Blanc" mountain, Europe's highest peak.

There are no real places to avoid. Just keep in mind the airport is situated both on Swiss and French territory, so be careful with that. There are always some police cars driving around the airport but they never will bother you, except if you're trying to enter the airport territory.

Being centrally located in Europe, and being a very international city, close to the Alps, the traffic in Geneva is really interesting as it is very diverse. There are some long-haul flights, and mostly European flights. But at least, you will see a lot of different airlines in Geneva, and not always the same tails like in major hubs.

Geneva is a hub for EasyJet, Swiss and Etihad Regional (Darwin). Despite being more frequent than other airlines, these three leave a lot of space for the other carriers.

Intercontinental or Long-haul Flights are made by, Swiss to New York, Kuwait Airways to Kuwait City via Frankfurt, Air Canada to Montreal, Air China to Beijing, United Airlines to Washington and Newark, Saudi Arabian to Jeddah,, Qatar Airways to Doha, Etihad to Abu Dhabi or Emirates to Dubai.

The types mostly seen are A320 Family planes and 737s for most European flights. You will also see ERJs, CRJs, Avros, Dashs or Fokkers. The C-Series will also fly for Swiss out of Geneva soon. Intercontinental flights are on A330s (Swiss, Etihad, Kuwait, Air Canada, Air China) B767s (United) and B777s (Emirates). Qatar will fly the 788 as of Summer 2016. Kuwait sometimes flies the A300B.

Winter Charter Season brings a wide range of other airplanes: it is not unlikely to see an El Al 744 or an Aeroflot 330 during that period. Equipment changes frequently to respond to high demand in the December to Easter period.

In Geneva you can see also a lot of Biz Jets, because it is a very political city. Jet Aviation and PrivatAir have their home base at GVA. You are likely to see some Boeing Business Jets from 707 to 787 on a regular basis, and a wide range of Airbus, from the smaller 318 to the bigger 340.

To get to the airport, you will be able to take busses from Geneva Central. There are several bus lines that take you there. The easiest way remains the train from there, that will cost a couple of francs, and will get you in the airport terminal in 6 minutes.

To move to the different spots, the best way is to have a car. You can still be a pedestian though and use the busses. Walking distance from the terminal to spots 1, 2 and 3 is about 20-30 minutes. With the bus, take the number 28 ("Meyrin - Hopital") for 5 stops and exit at "Blandonnet". Walk up the road and you'll get to the Tag Aviation terminal (Spot 1) and from there, spots 2 and 3 are respectively 200 and 400m walking distance.

For spots 4 and 5, walking distance is also about 20-30 minutes. You can take bus number 28 ("Jardin Botanique") 4 stations to "Tunnel Routier" to get to spot 4 that will get you quite near, just at the tunnel entrance on the Swiss side. Walking from there will take a lot less time. To get to spot 5, you can change the bus from there to bus F (Ferney, Gex) for just a quick ride through the tunnel and exit at "Chemin de Colovrex". From there, take a right on the Chemin de Colovrex all to the Lidl supermarket.

http://www.dpts.org for all information about timetables, and expected special visitors.