Burke Lakefront Airport is a general aviation airport serving downtown Cleveland and the surrounding Northeast Ohio area. It is the fourth busiest airport in Ohio, and acts as a reliever airport for Cleveland Hopkins International Airport. Located on the shore of Lake Erie in the heart of downtown Cleveland, BKL handles much of the area's GA flights, as well as many of its sports charters.

The airport recognizes spotters and a local aviation site OPShots.net, but of course requests that spotters are courteous to arriving celebrities and business executives. The airport serves no scheduled traffic, but is capable of handling commercial and international traffic. The airport has two parallel runways: 6R/24L and 6L/24R, the latter having been recently equipped with EMAS. 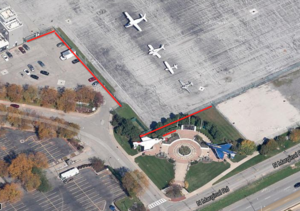 Spots at the employee parking lot and Marjorie Rosenbaum Plaza 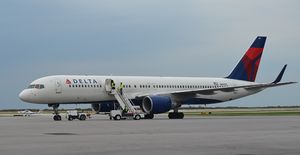 This location is towards the entrance of the airport, and is only accessible by foot. The employee parking lot offers views of parked aircraft, as well as views of take offs and landings. The plaza is slightly elevated and offers nice views, but the fence may get in the way. However, behind the plaza is a small paved path that offers good ramp views. Featured at this site are the McDonnell-Douglas F-4 "Phantom" jets painted in the livery of the Air Force Thunderbirds and Navy Blue Angles.

The terminal offers views of the ramp and of landing aircraft. There is a small fence in some areas, but shouldnt be in the way too much. The terminal is open to the public. The International Women's Air and Space Museum is located throughout the terminal. 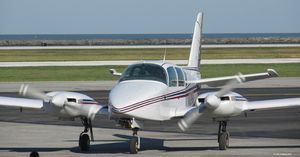 N724GA a Grumman American GA-7 Cougar seen from the terminal at BKL.

Voinovich Park is a public park located at the end of East 9th. Parking is available. The park provides excellent approach shots to runway 6R and 6L.

North Marginal Road runs adjacent to the airport property. The road itself is in poor condition, but is lightly traveled. To get good shots stop the car and walk to the fence, but please use emergency flashers. There is a paved trail between the road and the fence. A large portion of the ramp is double fenced.

You may be asked not to record tail numbers, but there are no areas to avoid while spotting at BKL.

Burke handles general aviation traffic. The majority of traffic is business jets, but also individuals and small single engine props from the flight schools. Sometimes transient military traffic will stop in to refuel. BKL also handles many sports charter flights including MD-80s, A319s, A320s, 737s, 757s and 767s. The Cleveland Clinic operates S-76s and C560s from the airport. The airport is equipped to handle international flights.

The Cleveland National Air Show, founded in 1964, is held Labor Day weekend every year, and is attended by 60,000 to 100,000 people. The show offers a large static display of private, commercial, and government aircraft, many open for tours. CNAS features stunt planes throughout the day, and performances by either the the U.S. Navy Blue Angels and U.S. Air Force Thunderbirds alternating every other year to close the show. The show runs for three days, typically between the hours of 9:00 to 18:00.

Burke is located in the heart of downtown Cleveland, and is located within walking distance, or a short drive from many hotels. 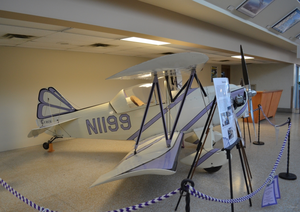 The International Women's Air and Space Museum collection displayed throughout.

There is plenty of parking outside of the airport terminal for a charge of $6 a day. If you are visiting for a short time park at the curb.

Retrieved from "https://www.spotterswiki.com/index.php?title=Burke_Lakefront_Airport&oldid=13667"
Category:
Cookies help us deliver our services. By using our services, you agree to our use of cookies.