The only official aircraft observation park in Canada, Jacques-De-Lesseps Park is located at the intersection oh Halpern and Jenkins on the southeast side of the airport. It provides views of aircraft arriving an departing on runway 06R-24L and of the passenger terminal ramp areas. Stadium-style bleachers provide the opportunity for unobstructed photos. This blog post has a good review of the location. 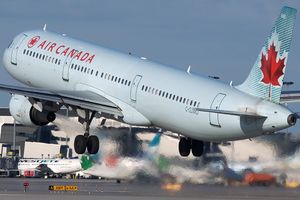 This spot is a gravel parking lot near runways 24L/6R. For photos, you will need a step ladder, but is very good for rotation shots of aircraft taking off. Some aircraft land on this runway, but most tend to land on 24R/6L. Best in the mornings. 70-200 mm lens works well, with a 300 mm OK for late rotations. Note that this is private property. Google Map

This spot is a dead end street that runs parallel runways 24R/6L. For photos, you will need a step ladder, but is very good for touch-down shots. Great in the afternoon for European arrivals as they generally land on this runway. Best with a 200-300 mm. Google Map

This spot is a dead end street near the end of 24R. Good if you want head on shots, or just want to watch planes land. Very popular with families on the weekend. Google Map

This spot is a hill behind an arena near the threshold of 6R. Good in the mornings when they are landing on 6R. Park near the community gardens and walk up the hill. There are wires to worry about so watch your shots! Google Map

YUL has an interesting mix of European and North African airlines flying in.

USA traffic is the normal mix of RJs and narrow bodies from US Airways, American, United, and Delta.

To spot at YUL, you generally need a car to get around, and a ladder is helpful.